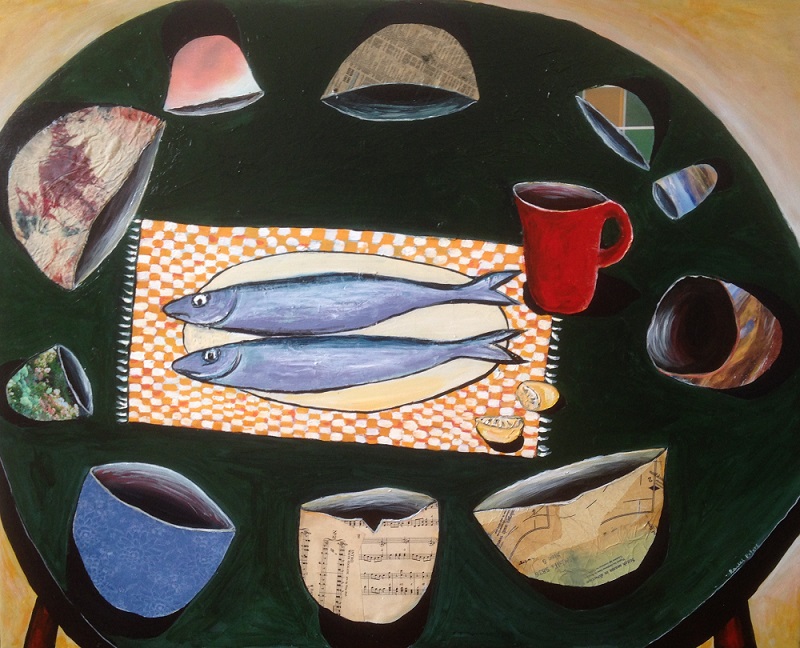 Those of us at church on Sunday had a rollicking time. Along with the usual suspects, other friends and associates dropped by to celebrate my ordination, including some card-carrying atheists, a BATS* pagan, a BUV representative, and a dog. Several people wore rainbow flags, and a young transgender person sent their apologies; as they told me later, their butt hurt so badly from a recent hormone injection that they had to stay home. Fair enough!

The gathering was a beautiful illustration of the song which we sang: (For Everyone Born) A Place at the Table, and it was particularly fitting that, on the day, we also displayed a gift from Rachel Peters by the same name. Her painting (above) is now front and centre in the space, and I hope it stimulates much reflection on who Christ is calling to the table at Sanctuary.

A few weeks ago, I attended the Equal Voices Conference in Melbourne. It was an opportunity for LGBTIQA+ people and their allies from all over Australia and New Zealand to gather, hear stories and learn from each other about the particular challenges LGBTIQA+ Christians face.The stories were myriad, but what came through loud and clear were themes of suffering, pain and rejection.

The conference was the day after the launch of the Preventing Harm, Promoting Justice report, and several authors and contributors were present. This report, a joint project of LaTrobe University, the Human Rights Law Centre and Gay & Lesbian Health Victoria, investigated what are termed ‘ex-gay’ or ‘gay conversion’ programs; that is, programs which try to counsel and pray people towards cisgendered heterosexuality. The report found that this has a devastating impact on people, affecting them psychologically, emotionally, spiritually and even physically. You can download the full report here. Chris Csabs, who spoke about his experience, is running a change.org petition pushing for such therapy to be outlawed across Australia. You might like to sign it (here).

An extraordinary number of people at the conference had been through such programs. Despite this, nobody reported a change of orientation. Instead, they reported strong feelings of failure, sinfulness, self-loathing and self-rejection, to the point that many had gone through significant periods of self-harm. Yet despite the hurt that many had experienced, whether from active rejection or whether simply from knowing that their sexuality or gender would never be acknowledged, accepted or affirmed by their church, I was struck time and again by the generosity and faithfulness of the conference attendees. Those I met clearly love God and are agents of God’s love in this world.

What also struck me is how important it is for churches to speak out. Powerful institutions are teaching and acting in ways which reject, marginalise and silence people, and which push them to self-loathing and self-harm; in their rigid orthodoxy, one might say many religious people are “tying up heavy burdens, hard to bear, and laying them on the shoulders of others” (Matthew 23:4). In such a situation, our silence offers neither hope nor good news to the victims. And so we must call our institutions to account, and we must go to the people who are hurting and offer them Christ-like acceptance and love. But we do so knowing we’re in good company.

Who is this man, they asked, who “welcomes sinners and eats with them” (Luke 15:2)? Whoever this man is, I like to hang out with him. I like to see glimpses of him in people who might be different to me, but who, like me, are made in the diverse and kaleidoscopic image of God. I like to follow his example of feeding first and teaching later; and I feel confident that, in his loving, generous, forgiving and accepting hospitality, there is a place at the table for everyone.

*Burn At The Stake (their term)