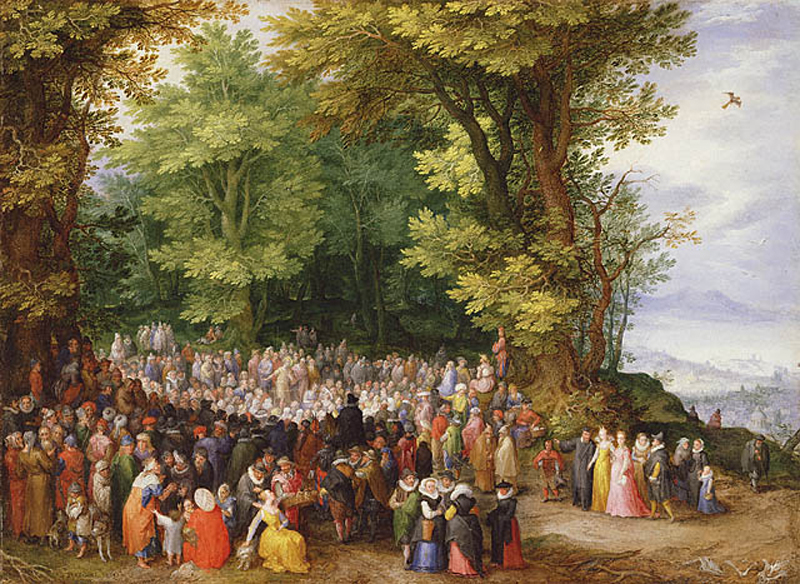 When I was almost 12 years old I discovered a big thick novel called Magician, and from the moment I picked it up I couldn’t put it down. For 800 pages I was engrossed in a different world, a world of dragons and magic, fear and bravery, love and loss, and an epic adventure through a world very different to our own…And finally the threads of the story were tied together in a grand conclusion. From that time I was hooked. I read book after book, each opening up a different world. Each was similar to the last in many respects, and yet at the same time radically new. After Magician I was lost in The Wheel of Time, and Game of Thrones, the Shannara Chronicles and Lord of the Rings. Many of those books have now been made into movies or high-budget TV series, and you can see it on the screen. But back then I saw it all in my head.

More recently I’ve been exploring the idea of reading scripture the way I read these novels. What if we read scripture as a story? Can we see how this passage follows from the one before? Can we see how the narrative threads lead into the next? And the dialogues too. What if they aren’t just independent, philosophical dissertations – what if we read them as part of the story? Part of the dialogue between the characters in the story?

And more than that, what if we allow ourselves to be drawn into the world of the text? Can we be drawn into a world that is very different to our own? What if we feel and see what is happening? Like images on a screen, or rather, like the way that we are drawn into a novel and feel like we can actually see this world and it’s creatures. So I want to try something a little different today. Indulge me, and let’s see where this takes us.

As we enter world of Matthew we enter a world very different to our own. In Matthew’s world the earth is not a giant sphere hurtling through space, in a galaxy of stars thousands of light-years away. In the pre-scientific world, Matthew knew that his readers saw the cosmos very differently.  In Matthew’s world the earth is vast and broad, but if you keep walking in the same direction for long enough you will come to the edge of the world – to the place where the dome of heaven rests on the ends of the earth. In Matthew’s world the earth is largely flat, and yet huge mountains reach up into heaven. And as the people stand on the earth they look up into heaven. Heaven is the sky and the sky is heaven, and it is only just out of reach of human hands. Can you feel the earth under your feet? Can see you the mountains around you? Can you see the sky-heaven, just up there? It is full of clouds and winds and stars and angels and demons and gods and the sun and the moon and planets and the constellations and the invisible powers of the air. The stars are just up there, and they are powerful beings that control the fates of mortals on earth.

In a way, the sky is like a mirror image of the earth. Anything that exists on earth, anything that really matters, also exists in the sky-heaven. A king on earth has a star in the sky-heaven. Perhaps Herod has a star? The Roman emperor certainly does. Rome itself would be more than a mere star. Perhaps it would be a mighty constellation, dominating the powers of the sky, and dominating our lives from the sky, just as it dominates life on earth through the mundane realities of soldiers and governors and taxes. On earth we see conflict between nations and empires, and Rome ever victorious. And in the sky we see conflict between stars and planets and angels, the same conflict as the conflict on earth, but enacted also in the sky.

This is the world we are entering into, where the sky reflects the earth, and earth reflects the sky. In both there is conflict, but in both Rome is ever victorious, and dominates life and presses people in. So where does hope come from? From earth, or from the sky-heaven? Is hope even possible in this cosmos?

As we stand on the earth and see the sky-heaven above us, filled with conflict between stars and angels and planets, with the stars of Rome dominating and constricting our lives, let us look higher still. We cannot see it ourselves, but the wise ones and the prophets tell us that there is more beyond the sky-heaven. That the earth and the sky-heaven are held within another place, a  place called the heavens. Not a place of conflict.  Not a place where powerful beings battle it out in the sky as a reflection of the battles of soldiers and armies on earth. Not a place where the stars and constellations of Rome emerge dominant over the stars and constellations and planets and gods of all other peoples. No, this is different. This is something we cannot see. Not heaven, but the heavens.

In Matthew’s world, the heavens are the place where God is truly king. Where all creatures reflect the perfect love of the creator, and join in shouts of joy for the life-giver. From this place of dynamic harmony and transformative possibilities comes hope for the earth and sky. From this place comes hope, springing up in the earth. It is the Kingdom of the Heavens, becoming a reality also here among us.

So we listen to Jesus, and everything he has to say. And now we’re walking with Jesus, and we follow him up a mountain. And he sits in the position of a teacher, and we listen. And he begins to tell us what it means to live the Kingdom of the Heavens. If the Kingdom of the Heavens is the dynamic hope for earth and sky, what does it mean to live it?

So we listen. And it’s not easy stuff. It’s difficult. Jesus is asking us to look at ourselves. At our anger, our lust, our untruthfulness. But this is the way we can participate now in the Kingdom of the Heavens, to begin to see it embodied in us. And Jesus speaks for a long time, and asks us to consider many things. And he asks us to consider the laws we live by, and how we can go beyond them. He says this: We all know it is wrong to lie under oath. We know that already, Jesus says. But what about that part of us that seeks to deceive whenever we can get away with it? Perhaps we deceive ourselves into thinking it’s not really lying, or justify ourselves when we don’t actually lie, but we give a false impression. So Jesus asks us to always seek truth. To live the Kingdom of the Heavens is to seek truth.

And as Israelite people who follow the laws of Moses we know that when a man disposes of his wife he should follow the proper proceedures, and give her a certificate of divorce. But what about the inherent wrongness in this whole way of thinking, that sees people as disposable? What about the immense distress caused when the person with the power casts the other out of home and out of community? There are times when it is right for a marriage to come to an end. We know that. But if we view people as disposable, there is something wrong with that.

But Jesus says more. He says we also live the Kingdom of the Heavens by how we engage the kingdoms of the earth and sky. The kingdoms of Herod and Caesar. For those who hate, and have the power to enact their hate, we pray for them. We pray for their hearts to be changed. To those who have power over us and abuse us, we stand our ground. We refuse to do them harm, but we also refuse to be treated as less than human. We honour the humanity in ourselves and in others. We seek the wellbeing of anyone in need, and we practice radical trust in the goodness of God. And Jesus tells us that one day the Kingdom of the Heavens will fill the earth and the sky.

And Jesus says many things, and when he has finished we follow him to see what he will do next. But now we move out of the world of Matthew. Out of the world of swords and arrows and kings and the angels and demons and stars and planets who battle in the sky. We came back to our world, and our world looks quite different. We see our cosmos very differently. And yet, in some ways, perhaps our world is not so different.

When I read those novels and became absorbed in them, and finally emerged back into the world of my daily life, I felt like something came with me. That in some way the story came with me. But how much more this story, the story that created us as a people and makes us who were are. So as we come back into our world, we bring something with us. The story does not remain in the text, it does not stay locked in pages, but it comes with us and lives with us. The story is alive in our world. It is the story that makes us who we are. And it is here, in our world, that we will find out what happens next. Ω